What Technique Is Right For You?

The purpose of the sacrifice bunt is to move a runner into scoring position. It's often used in late innings and critical situations. So why is it that so many players are not very skilled at laying down a sacrifice bunt? The primary reason is poor technique.

There are basically two methods of laying down a sacrifice bunt, either pivoting or squaring around towards the mound. The most important thing is balance, comfort, and confidence. Experiment with both methods to see which technique works best for you. No matter which method you use, the way you grip the bat will be the same.

Most younger players are taught to grip the bat with the upper hand by sliding the hand up the barrel towards the trademark and gripping the bat between the index finger and thumb. This keeps the fingers behind the bat and reduces the chance of the fingers being hit. The negative part of this grip is the loss of control over the bat. As you get older you will want to change your grip to one that puts the bat in the palm of your upper hand. Your fingers and thumb will be wrapped around the bat and you will have greater bat control but your fingers will be exposed to being hit by the ball. Once you become a confident bunter you won't worry about your fingers being hit by the ball.

Experiment With The Bottom Hand

Many times players will leave their bottom hand on the knob of the bat. While this may work for you, experiment with sliding the back hand up on the grip 5 or 6 inches. You may find that this will increase your bat control and with it your ability to have the bunt go where you want it to go.

With the pivot method, you will pivot on the foot closest to the mound and take a small jab step towards the plate with the back foot. At the same time you must get the bat in the proper position to bunt (Barrel of the bat higher than the grip, top of the strike zone, not to close to the body). One method of getting the bat in the proper position is to swing the bat forward from your back shoulder like you were using an ax. It's a small movement that will get the bat out in front of your body at approximately the right angle and at the top of the strike zone. 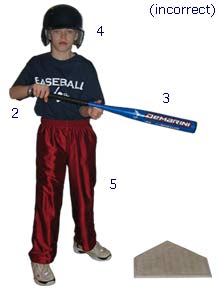 Below is a few reminders of good bunting technique:

The player should use his knees to bend down to get to a low pitch. The bat head will still have to drop on a low pitch, but it should be kept to a minumum as dropping the bat head only to bunt the ball is very difficult to do successfully. When dropping the arms to bunt a low pitch it's important to try and drop both hands in order to keep the bat head above the handle. This will prevent a pop-up directly to the catcher.

With the square around method, you will want to again pivot on the front foot but instead of using a jab step with the back foot, you will move the back foot forward, even or slightly forward of your pivot foot. This will square up your shoulders toward the pitcher. The advantage to using this method is that it's easier to bunt the inside pitch. The disadvantages are that it takes longer to get in position and you must be careful not to step out of the batters box or worse on the plate.

Whether you square around or pivot, you want to make sure you are in a comfortable and athletic position to bunt the ball. Your knees should be bent and your bat should be held out in front of your body. The barrel of the bat should be at the same height as your eyes and at the top of the strike zone.

As the ball approaches use your knees to adjust to the height of the pitch. Many people believe it's difficult to bunt a high pitch. In actuality, the opposite is true. If you remember not to bunt any ball that is higher than the bat, then you are in great position to bunt the high strike. The lower pitch on the other hand requires you to drop down to be able to bunt it. To keep the barrel of the bat higher than the grip of the bat, you must use your knees to adjust to the low pitch. Never drop the bat head to bunt the ball. Use your knees and both arms to put the bat in the proper position to bunt the low pitch.

Focus on the top half of the ball as it approaches. Many people will talk about deadening the ball with bat as you make contact. All this means is that you will allow your arms to act as shock absorbers as contact is made. This is something to work on as you become more confident, but is secondary to being able to lay the bunt down in the direction you want. Determine the direction of the bunt with your lower hand. This keeps the location of the barrel of the bat in the same approximate location, no matter where you are going to bunt. This will help for consistency. If you're a right-handed hitter and you want the bunt to go towards third base, then pull your lower hand in towards you to provide the proper angle. For first base, push your lower hand out towards the mound to give the bat the proper angle.

Finally, be sure to always bunt the ball first and then run. When a sacrifice bunt is called, your job is to move the runner not to get a base hit. Lay down a good bunt and then run.

Getting More Accurate Throws From Your Team (April 5 2016)

QCBaseball.com is proudly sponsored by

Teamsnap.com - The easiest way to manage your sports team online

Why do many players have trouble bunting?

Maybe it's lack of coaching and practice.

How many times do you see a batting practice where a player squares to bunt a couple of times and whether he lays the pitches down successfully, fouls them off, or flat out misses them, he then proceeds to start swinging the bat. Rarely will you see a coach correct poor bunting technique and many times those two attempts are the only bunting practice that player gets during practice.

Want your players to become good bunters? For each bunt they don't lay down take away a swing. So if you require each player to lay down two bunts during batting practice before they get ten swings, just subtract the from twelve swings the number of times it takes the player to lay down two successful bunts. If you consistently do this, it won't take long before your players will understand the importance you place on their ability to bunt.

Just wanted to say Thank you for the great website. Great information for this new coach. It sounds like baseball gave a lot to your life, so thanks for giving back to baseball.
- Ray K.